McNeil Jewelers was formed in 1946 when the founder Robert D McNeil came home from service in World War II and attended the Western Pennsylvania Horological Institute for Watch making. Known as the GI Jeweler, Bob and his wife Josephine began the business in small storefronts in the downtown Norwich area specializing in watch repair and carrying a variety of gift items. As the business grew more jewelry lines were added. In 1974 McNeil Jewelers moved to a much larger showroom at 25 South Broad Street in the heart of the downtown Norwich business district.

After graduating from Norwich High School in 1973 he attended the Bowman Technical School in Lancaster, Pa to apprentice in jewelry making, stone setting and repair.

After receiving his certification in 1974 he returned to work for his father, Robert D. McNeil, in the family jewelry store, serving the jewelry repair needs of the area. 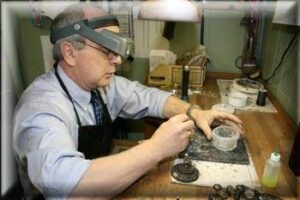 After graduating from Norwich High School in 1977 he attended the Joseph Bulova School of Watchmaking in Woodside, NY where he studied the art of watchmaking.
While at Bulova he completed the required course to be granted the title of Certified Accutron Technician. At graduation he was selected as 1 of the 12 students Worldwide to attend the Watchmakers of Switzerland Training and Educational Program Centre De Prefectionnement Horolger Neuchatel (Switzerland).
In December 1979, he successfully completed an advanced course in
modern watch servicing under a scholarship in Neuchatel Switzerland. He returned to the family business and services most all brands of watches, with a specialty in American pocket watch restoration.
In September of 1998, he completed the American Watchmakers Institute bench course in Seiko Kinetic Quartz Watch Repair. 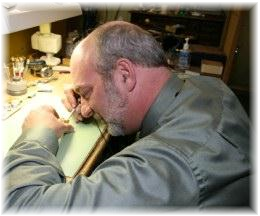 Service with Honesty and Integrity

James joined the company in 1974 and Patrick in 1979.  Bob and Josephine retired in 1982.
Today James and Patrick The Boys continue to service the watch and jewelry needs of the area with the same passion as their parents and strive to provided that service with honesty and integrity that is the McNeil family tradition.